The dRonin job is used for builds that produce artifacts (official releases, nightly builds, and triggered pull request builds. It's a useful place to get the latest development code.

Current development code may have severe bugs. It may brick your flight controller or cause a crash. Development builds are only intended to be used in safe conditions by experienced testers.

Here's an example view of the dRonin job's web page:

The important part of the page is the "build history" on the left. In this example, there's several builds:

All of the builds have blue dots next to them, indicating that they completed successfully. If the build had failed (whether because of a problem with Jenkins or the code being integrated) the dot would be red.

If we click on #288, we can see the page for the individual build:

Ignore the changes information. The useful part of the page is at the bottom. There are three configurations:

If we click 'master', we are taken to a page with the Linux artifacts:

Alternatively, there is a pull-down menu that can be accessed to see build output, next to the configuration name: 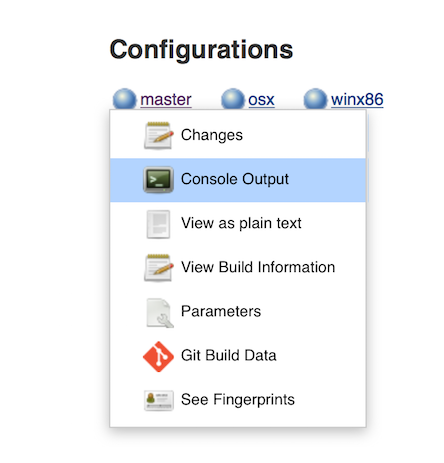 From here, you can see the individual logs to determine why the build has failed.

Click on 'Details' to go to a page where in turn you can click on Master's pulldown -> Console Output; in turn this will show you the build output so you can determine why the build failed.

In the above sequence, a developer requested that Jenkins build artifacts for this PR. Links to the three sets of artifacts are in the post. The artifacts in this build are a combination of the latest next development code with the changes in this pull request applied to it.

Updated less than a minute ago